Coming back from winter break is tough for many reasons, one of which is that the students are a bit rusty with their physics skills. Whether you fall on the side of giving homework over the break or not (I have been in both camps, and most recently am in the camp of NOT giving homework/projects/etc over the break), students will still be rusty. With this in mind, and some inspiration from Kelly O’shea’s Card Sort activity, and the Goal-less problems that I am fond of , I created my own “Matching Game.”

Since we started school on a Thursday, I figured this could be a great 2-day activity for the students. The first day for figuring out what was going on (for all of us involved), and calming the chaos, and the second day to really get their brains in gear and feel confident in their physics. Which is pretty much how those two days went.
DAY 1

I had already laminated many of the card sheets, but hadn’t cut them all out. So, I had my first class period help me cut the cards; one set of cards per group and it took all of five minutes. Great! I figured this would be a good opportunity for them to check out their cards and start thinking about what they all meant, and wondering what cool thing we were about to do. The reality: they cut the cards, chatted with each other, and really did little wondering about what was on the cards and more wondering about what was next on the “to-do” for the day. 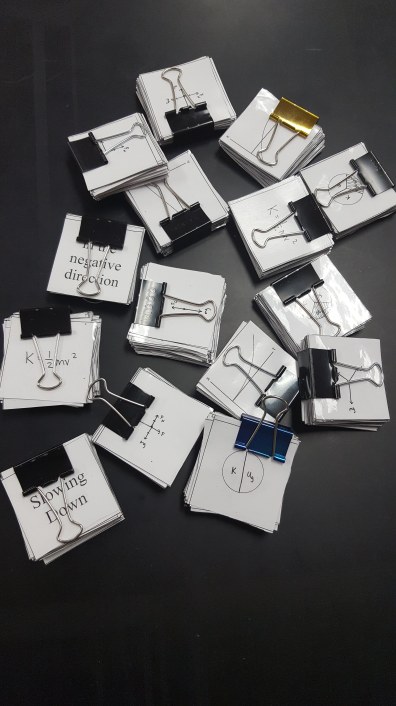 I explained that I had several different scenarios, all of which gave them a little bit of information but did not ask them to solve for anything specific. Their goal was to analyze the situation in as many ways as possible and find all the cards in their stack that could help represent that situation. Any equation cards that were used were to be solved using the whiteboards. 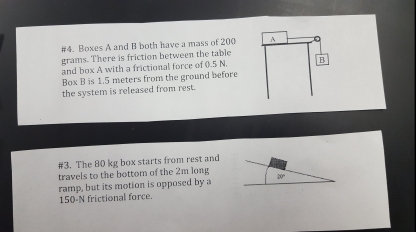 Simple enough, they understood. However, because I did not give them enough time to really think about their cards, it took them a bit longer than I anticipated for them to digest this information. For the remainder of my classes, I gave each group a set of cards and some instructions: “Sort these cards in a way that makes sense to you and your partner. I’ll give you about 8 minutes.” This seemed to help A LOT. And it was interesting to see how groups sorted their cards. Some tried to put them into categories with the word cards as the headers. Others simply put all graphs together, all energy pie charts together, and so on. 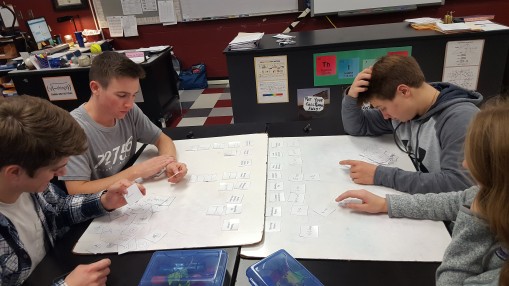 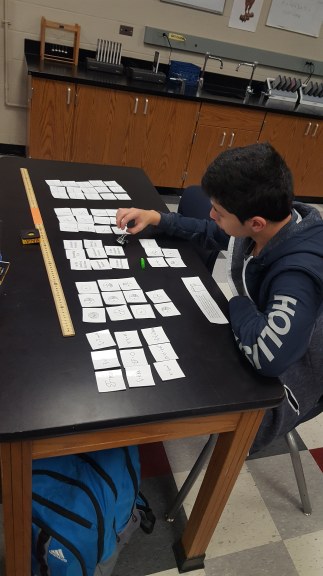 Once the students had organized their cards, I handed out a scenario. In second hour, because it is my smallest, each group got the same scenario. The other classes split between two scenarios, mostly because I didn’t have enough copies of the one scenario when third hour came in. So I made the decision on the fly, and liked how it worked out and stuck with it.

The students did a nice job of working through their scenario. The first two scenarios were actually the “smaller ones” in terms of how many representations they could have based on where we are with our content. Once students had completed their analysis, I asked them to do some peer editing. 2nd hour students went to each board. They took their marker and made corrections to others’ boards, and if they replaced a card, they circled it in their own color to show that they had made the change. What I really loved was seeing one group make additions to a whiteboard that they didn’t even have on their own board. When I acknowledged this, one of the girls said, “I know! We had forgotten about this on our board, but remembered as we’ve been walking through. We fixed another board too.” Love, love, love this learning!

What I loved most about this day was the eagerness with which the students approached their problem. In every class, students were asking if we were going to do that matching game again. They instantly got to work sorting their cards, and as I came around with two different scenarios than from the day before, letting them choose this time, I was happy to hear a few groups choose a scenario that they knew they needed to be better at (e.g., “oh, I need to work on ramp problems. Can we do the box one?” one student would ask to his/her partner).

Most groups spent the entire class period working their one problem. So rather than peer editing, I simply walked around to check their boards for accuracy. Many times, I would ask a simple question, like “did you figure out how high that ramp is?”, to which they would say, “oh, no! hey that’s something else we could find!”.

The engagement level was high, and the learning level was high. Students were teaching each other, both “older” material and the newest material. Students were having to choose which models applied, and choose how best to represent the situation given. Students were having to explain why they chose certain cards as I would ask. And when they made changes to their cards, it was almost always because as they explained it to me, they came to their own realization about why a change should be made.

I really liked this activity as a first day back from winter break. I chose to do it because I thought it would be more helpful to the students to recognize what models would apply as opposed to create their own (like we do with whiteboarding). I did notice that on the second day, they were spending a lot more time with their whiteboards, which I took as a good sign that their brains were re-engaged. My favorite quote of the day: “We did this on our own!”

Update: I presented this activity at High School Physics Teacher Camp this summer during our share session. I got some great feedback, and in light of all the card sort activities that Brian Frank and Kelly O’Shea have shared, I am going to alter this activity just a bit. This year I would like to do the card sorts each unit/model, and as we add more models to our understanding of physics, they get more cards. Perhaps even color code the cards to make it easy to keep track of which cards go with which model. I hope to update once I get the details fleshed out and put into practice. Until then, physics on…

I teach AP Physics at a public high school in Northwest Arkansas. I love what I do and want to be the best I can be, so my students can be the best they can be. I teach physics through a method called Modeling Instruction, and am a recent convert to standards based grading. This blog is my attempt to reflect on my own practices, share for anyone interested, and build a community of teacher-learners who want to grow together. Please comment and share your ideas! View All Posts